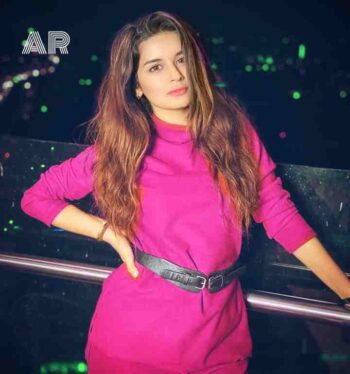 Avneet Kaur is an actor as well as a famous tiktoker. She is well known for her dance moves. she just completed HSC and scored 74 percent marks. Avneet Kaur was a contestant in a reality dance show Dance India Dance Li l Masters, She also participated in the reality show, Dance Ke Superstars in the year 2011. With Darsheel Safary she appeared as a contestant on “Jhalak Dikhhla Jaa Season 5” in 2012. We all have seen her in the movie “Mardaani” in which she played the role of Rani Mukerji’s niece “Meera”. Avneet Kaur is also in tv serial’s Aladdin – Naam  Toh Suna Hoga.
Avi is born on 13 October 2001, in Jalandhar Punjab India, she is just 19 years old. She is currently living in Mumbai.
Avneet Kaur’s mother’s name is Sonia Nandra and her father’s name is  Amandeep Nandra. She also has Sister Navreet and brother JaiJeet Singh.

Net Worth of Avneet Kaur

Avneet Kaur net worth is approx $1million this is the estimated income, she has never revealed her real income.

We all know that Avneet and Siddharth are in tv serial  Aladdin – Naam  Toh Suna Hoga, they look great together on the screen, also known as one of the best and most loved pair.
They are featured in the many music album and TikTok videos.
There were rumors that Avneet and Siddharth are dating each other but later they cleared it by saying that they are the best and closest friend.

Her songs are always trending on YouTube, her Songs are loved a lot by her fans,

It was a rumor that she is dating  Siddharth Nigam, but right now she is Single and focusing only on his career.

Darsheel Safary and Avneet Kaur
Darsheel safary and Avneet was the partner on the show Jhalak Dikhhla Jaa, at that time they were young in age but their chemistry was outstanding. Hope so we will see them soon together in the future most of their fans want to see them again on screen.
Which are the Favourite Actor and Actress of Avneet Kaur?
Favorite Actor
Favorite Actress
Favorite food of Avi / Muskan
She is a Foody Person who always loves to eat her favorite food is,
Sports
Yes, her favorite sports are Badminton, Football.
Which are the Female Celebs Avi likes?
She is a huge fan of
Favorite Hollywood actor and actress
Hobbies :
Favorites of Avneet Kaur’s
Drink: Tea
Destination: Paris
Colors: Red, Pink, Black
Video source: Bang Music.
Film Debut
She made her debut with the film “Mardaani ” in 2014.
Tv Add
As we all have seen her on many tv shows, she has appeared on many television ads such as