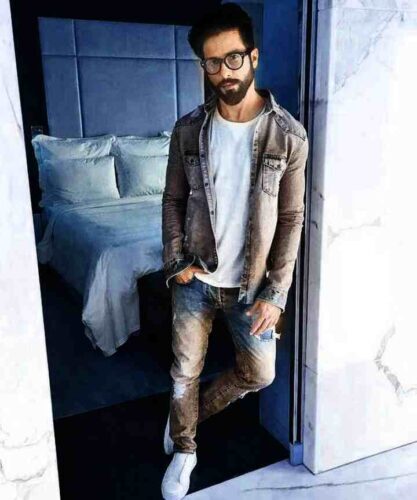 Shahid Kapoor was born in Hindu Family in Delhi, India, on 25/February/1981 (39 years old). He has got Awards like Filmfare Award, Life Ok Award, and more. Shahid hit movies like Kabir Singh in 2019 and Jab We Met in 2007, and more. Kapoor is also appeared as a Judge on the Tv show Jhalak Dikhhla Jaa Reloaded, in 2015.

Net Worth of Shahid Kapoor


Note: This is the Estimated Income of Shahid Kapoor, he has never revealed his income.
Car Collection
Shahid Some of the car’s mentioned below,

Shahid Kapoor Father is Pankaj Kapoor, he is an Actor, and Mother is Actress Neelima Azeem. Supriya Pathak is his Step-Mother, she is also an Actress. He has two brothers,  Ruhaan Kapoor and Actor Ishaan khatter. Shahid’s sister is Sanah Kapoor. Bollywood Kabir Singh Shahid Kapoor was in affairs with Co-Star Kareena Kapoor, while filming the Jab We Met movie they Broke Up. After that Shahid Kapoor Married Mira Rajput on 7/July/2015, they have Son Zain Kapoor and Daughter Misha Kapoor.

Shahid is a famous Actor and for his super acting, got many Awards Some of them are below,

Shahid Kapoor helped (SKJ) Superstar ka Jalwa, he raises some amount of money to give wages of the cine and Tele artists association. He grants his support for the NGO, which helps the kids.

Shahid donated to NGOs and trust, he has never revealed his donation, According to Stardom1, Shahid donated to the needed ones. Kapoor helped many people for education, he has done many Charity events.

Shahid is a socially active person, loves to share his pictures and stories on Instagram.
Followers: 29.3 Million.
Following: 152.
Posts: 890.

From which Academy Shahid learn Dancing?

Shahid is a good dancer, he had learned dancing from the Shiamak Davar dance academy.

Kareena Kapoor and Shahid were in a relationship but after the Movie Jab We Met, they broke up.