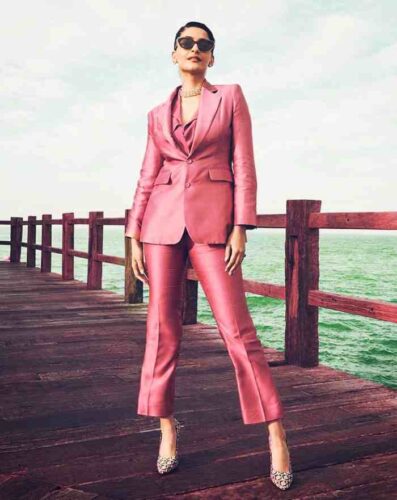 Sonam Kapoor was born on 9/June/1985 ( 35 years old ), in a Hindu, Kapoor family in Mumbai, India. She debut from the film Saawariya, in 2007. Sonam has got the best female debut award and Film Fare Award for here Acting Performance, she was also part of the Forbes List. Sonam Hit Movies like Sanju and Veere Di Wedding, in 2018, Bhaag Milkha Bhaag and Raanjhanaa in 2013.

Net Worth of Sonam Kapoor

Note: This is the Estimated Income of Sonam, She has never revealed her income.
Car Collection

Sonam completed her Schooling from Juhu’s, Arya Vidya Mandir. she has done college from Mumbai University and the University of East London. Ahuja Highest Education Qualification is Bachelor Degree in Economics and Political Science

Sonam Kapoor born in a Hindu, Kapoor family in Mumbai, India. Her father is an Actor, Anil Kapoor and mother is Sunita Kapoor. Her brother name is  Harshvardhan Kapoor, he is an Actor, and sister Rhea Kapoor, she is a Producer.

Before Marriage Sonam was in Affair with Ranbir Kapoor, Punit Malhotra. She Married Anand Ahuja, on 8 May 2018, after been together for a long time.

Sonam was in Controversy with Aishwarya Rai Bachchan, when she said that Aish has Worked with her dad, Anil Kapoor, So she must call Aishwarya Aunty.

After her First debut movie Saawariya, with Ranbir Kapoor, there were rumors that Ranbir dumped Sonam for Deepika Padukone.

Sonam Kapoor donated to NGOs and trust, she has never revealed her donation, According to Stardom1, She donated to the needed ones. Sonam helped many people for education, she had done many Charity Shows and Chamapning for Elle Breast Cancer, she is also a Brand Ambassador of Elle.