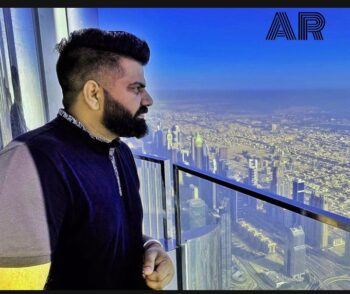 Gaurav Chaudhary is popularly known as technical guruji, he speaks about specifications of mobiles and also suggests which phone to buy. Guruji was born on 7 May 1991, he is just 29 (as in 2020). His home town is Ajmer, Rajasthan India. Gaurav has completed his Education in M.Tech ( Micro Electronics), his hobbies are Reading, Travelling. He is the inspiration for many tech YouTuber’s. His Brother Name is Pradeep Chaudhary.

Technical Guruji ( Gaurav Chaudhary) does research on nanoscience and also works as Security Engineer in Dubai police.
He has completed his Schooling from, Kendriya Vidyalaya school, Bikaner, and College from Birla Institute of Technology and Science Rajasthan.
He was interested in posting videos on YouTube.
In the year 2015, he posted his first video on 18 October on YouTube.
He makes videos related to electronic gadgets.
He not only uploads videos on YouTube but also Focuses on his family business, in Dubai.
As he has his own android app, which Is connected to his YouTube Channel, we can see his YouTube videos directly on the app.
He is a very hardworking and multi-talented guy who focuses on his work to give proper information to his audience.

Technical Guruji has achieved the feat of being Worlds Best Technical influencer awards held at Cannes, France.
His Youtube channel”TechnicalGuruji” has crossed more than 18 million subscribers.
He was in the Forbes of 30 under 30 list which is only the second YouTuber after comedian Bhuvan Bam of
BB ki Vines.
He got the Golden Creator award.
Instagram
He is a socially active person who loves to share information about his gadgets on Instagram.
Twitter
He regularly tweets on twitter, shares good luck wishes of festivals and info related to his gadgets.
His account: @technicalguruji
Followers: 2.8 Million
Following : 0
Facebook
He is from 18 October 2015 on Facebook
YouTube
Video Source: Gaurav Chaudhary
Subscriber:18.3 million
Videos: 3.1 k.
YouTube Giveaway
We all can participate in technical guruji’s giveaway but the main thing is that we have to subscribe to his channel
And then we have to like, share, and comment on his posts, Random selection is done

Once technical Sagar said that there is no technical knowledge in Gaurav Chaudhary’s video he also blamed that after becoming famous never gave credit to his mentor so the uncalled rivalry started with both of them its a bad impact on the industry of Tech bloggers.

Cars:
He posted a pic on Instagram with his mother in which Rolls Royce.
Bike:
Who is the favourite YouTuber of Gaurav Chaudhary?

What is Technical Guruji Wife’s name, is he Engaged or not?